She was a foundling.
Crying under the moon, the guardians of the forest took her as their own.
She never knew her human mother and father.
The red bird with the shiny wings was her mother, the tree serpent her father.
So she played in the trees and flew the skies on top her mother.
Sometimes in flight she saw strange animals moving frantically below.
So strange she thought those creatures were.
At night she would sing the tree songs.
During the light she would play and gather plants for food and medicines.
Her spirit father would help her sort them by smell and texture.
Their shared language with shared thoughts and movements.
She didn't know she was human.
She didn't know how to be like them.
One day she was told by her spirit parents that she needed to learn of her human ways.
Funny, she thought I don't think I can do this.
They are so different speaking words that do agree with their minds.
Not smelling, or feeling or moving with thier knowing.
So she wandered into a village.
Picking up random things, staring at them wonderingly.
She picked up a spoon and stuck it into her wild hair...something shiny.
She saw herself in a reflective surface and laughed...what a strange creature in this thing.
She was a foundling, a forest creature, a spirit child.
Human in form only.
When the others approached her in the village she froze.
What are those creatures?
A strange feeling started creeping into her stomach.
She felt unease from the strangeness.
Running, running to the edge of the forest to safety.
She peers out curious and afraid.
Another day, another day..... 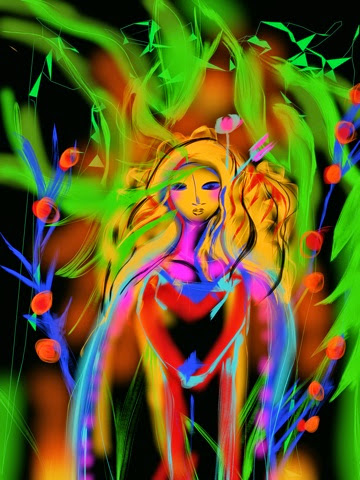